A Leica workshop from a participant’s point of view

A few weeks ago I received an extensive review from David, an enthusiastic photographer who participated in a workshop, some time ago. If you’re in doubt whether a workshop is something for you, his honest review might help you out. I’ve added some of the shots that he took during the day, plus a few shots that David took when he was in London.

‘After reading many reviews on Joeri’s website, I decided that it would be a good idea to do a workshop with him. You see, until recently I had worked with a screw mount Leica, and to step into the digital world I bought a Leica X (113), which of course is mainly to be used as an auto focus camera. So I thought it was time to get myself a Leica M 240, the chrome M-P version to be exact. After the first 100 pictures or so I found quite a few pictures to be slightly out of focus. Oh crap.. ‘ 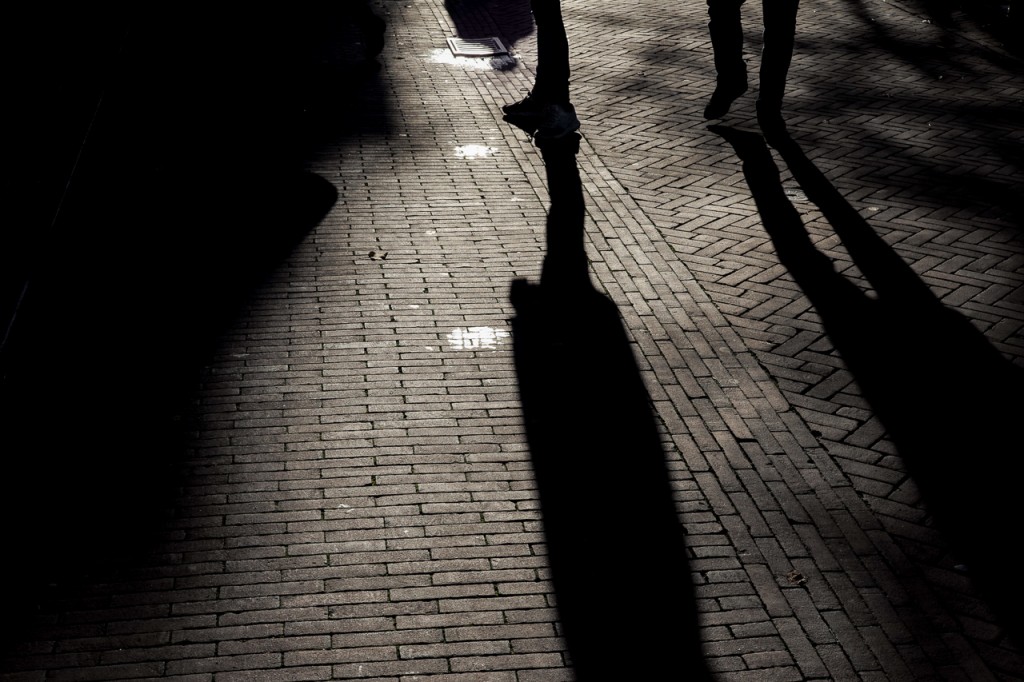 One of the first shots of the day. It is almost monochrome, although this file is in full colour.

‘Furthermore I had not quite found my “feel” with the camera. The screw mount has a “SBOOI” viewfinder on top which is a 1:1 view, much like the old M3. Of course after so many years (29 to be exact), one gets used to working this way. A great small little camera, which still works perfectly by the way.
To try to get this straightened out I even put a 1.25 viewfinder magnifier on, which in the end did sort of do the trick, but it wasn’t quite the same. And with glasses a bit of a pain in the butt with a 50mm. ‘

‘I met Joeri in the beautiful town of Delft. The autumn sun was coming through, I don’t think it could have been any better. We sat for a while in a café where Joeri took the time to look at the photos I had with me, and to ask me questions about my photography, were I wanted to go with it, and what equipment I had used in the past etc. A good warming up so to speak.’ 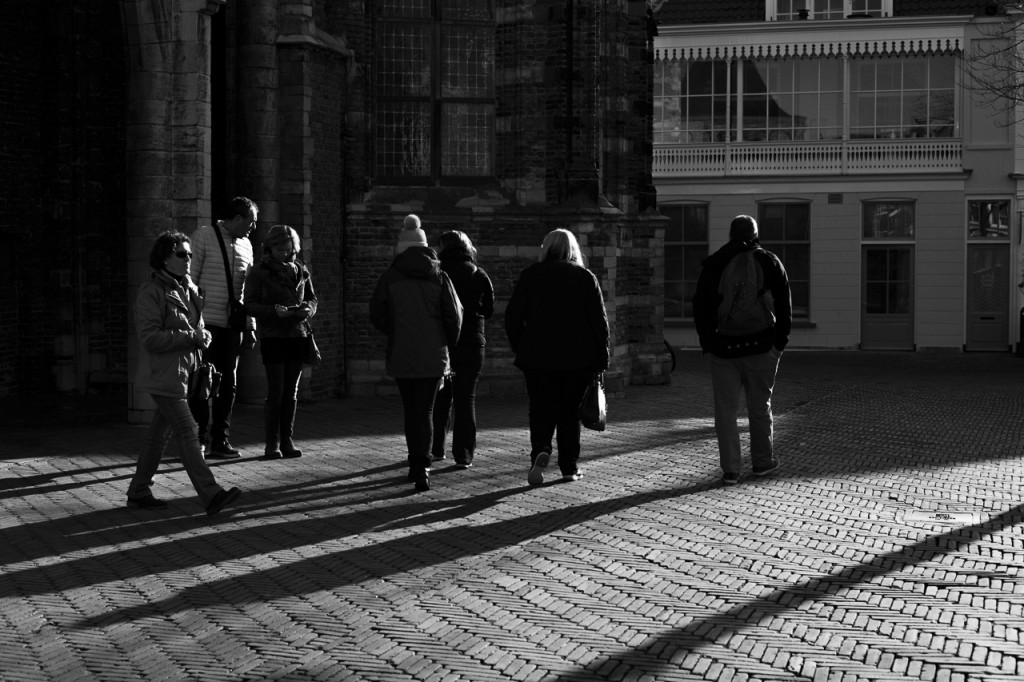 We had terrific light throughout the day. This is what you get on a sunny winter day.

‘Then it was time to hit the streets. Without going in to details, we pretty much did most, if not all of the exercises described in his book “Work your Leica”. The exercises themselves were really fun, and all had their specific purpose.
Joeri seemed pretty tuned in to what I was doing right and what I was doing wrong. The first thing I needed to do was to quit the viewfinder magnifier. I may use it with a 75 mm or so, but not with the 50 mm.’

‘The next thing that Joeri noticed was that my finger positioning on the lens was wrong. You see I was used to the 2.8 Elmar 50 which has a completely different throw to it, plus focusing is mostly done with the lens hood. I was using the tips of my fingers instead of the pads of my fingers, thus my accuracy was down the drain. The new method seems so much more precise, and comfortable to boot. Different lens different feel. Really.’ 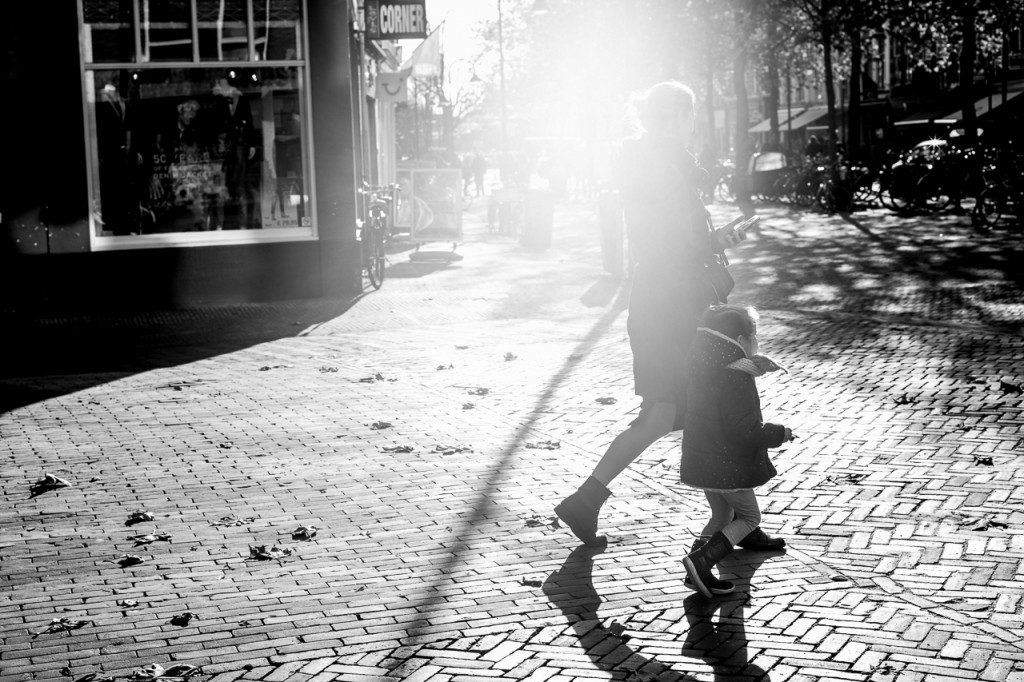 Shooting the 50 Summicron against the sun sometimes results in heavy flare like here. But it really does something to the image.

‘The day went by so quickly, as it seems to do when having fun. We stopped by the same café which by now was full with lunch people, but we managed to find a place to start up the laptop to see the harvest, and to discuss the results.
All in all I really had a lot of fun, and even if I learned a lot during the workshop, reading the book again helped me remember them all.’ 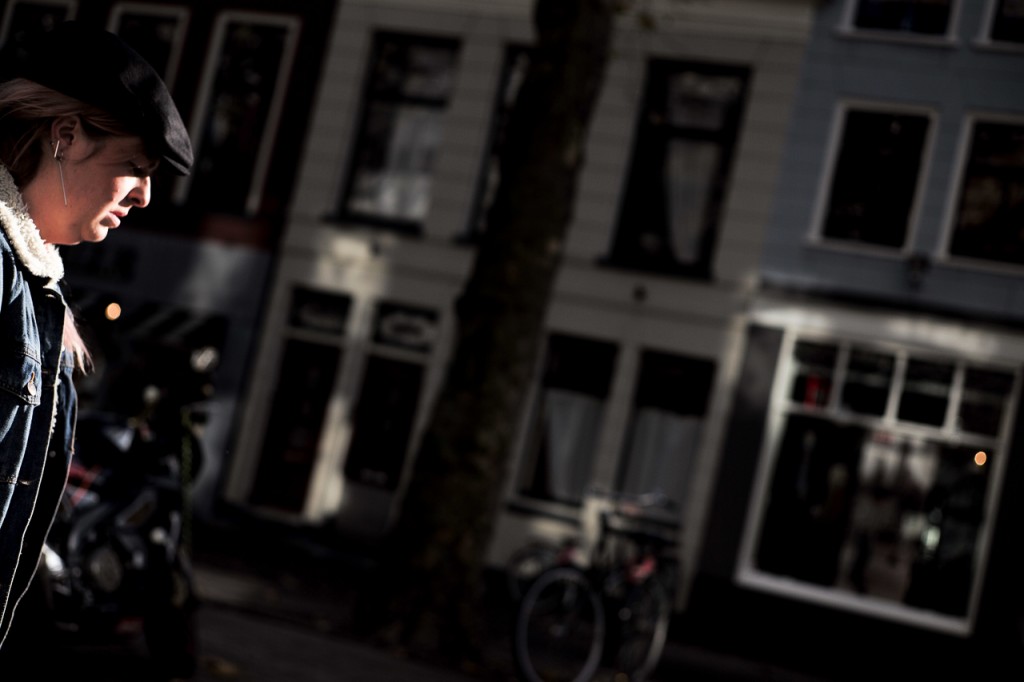 The unusual framing and the light results in a nice image.

‘I am writing this after a weeks visit to London, where I would hit the streets in the evenings. I really noticed the differences in my results. I ended up taking some pictures of a group of skateboarders on the Southbank. Now the M is not really known for its action photography, but I still managed to get quite a few good shots. You see here is where it became interesting, I could pretty much use all the techniques, or at least a mix of all to achieve the shots. Using the M seemed more intuitive, so I could concentrate more on composition and seeing what’s going on around me.’ 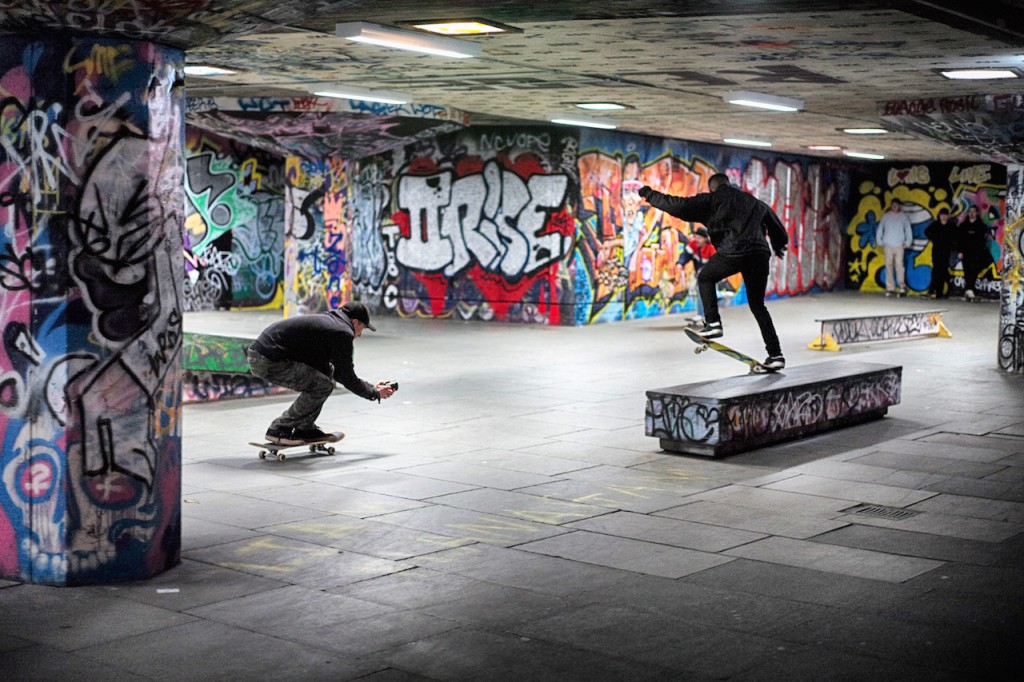 A shot full of action, made in London.

‘All in all I feel that after this workshop I’m better equipped to deal with the challenges of using a rangefinder in different situations. Yes of course an auto focus with tracking would be more convenient, and yes one of those would probably have taken better action shots, but that’s not the point. We all use rangefinders because we are purists, or maybe we just love the optics, or maybe because we want to blend in and not be seen as a tourist or a heavily equipped paparazzi. For me its a blend of the above, and on the streets of London I went unnoticed as usual, and if I was, people maybe thought that I had lent the camera from my granddad. At least I felt confident of getting better shots and thus leave the screen off to avoid chimping. Now it nearly feels like a film M….’ 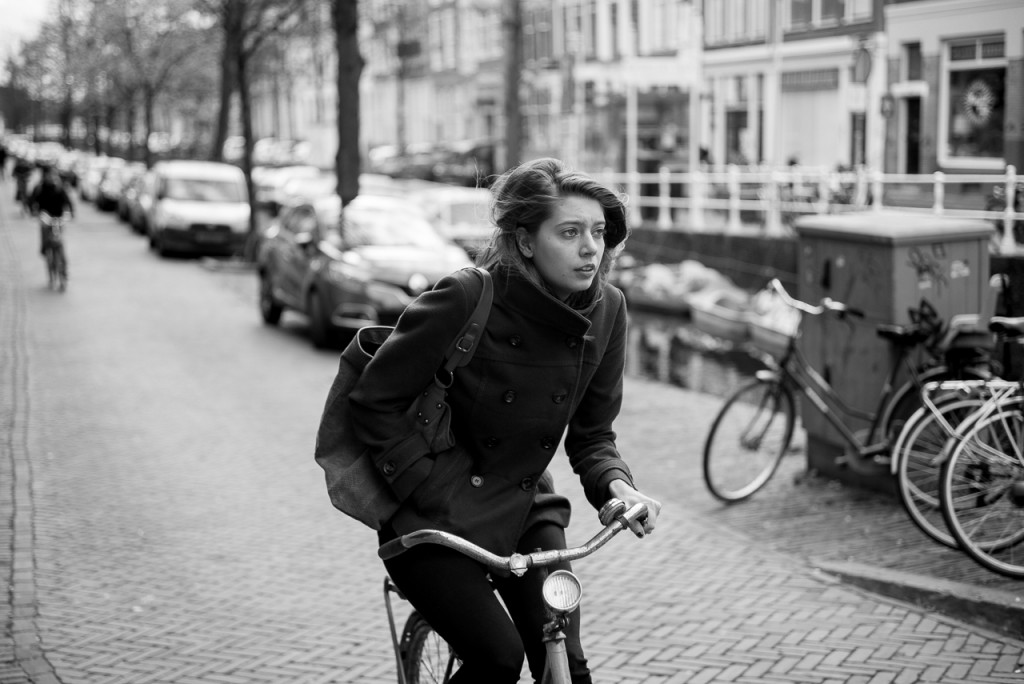 Shooting cyclists in action requires a lot of focusing skills (and a bit of luck).

‘So some of you are surely thinking: what’s the deal, just sort it out by yourself. Yes, that’s what I always thought. But believe me, having a professional to guide you through the process will make a huge difference.’ 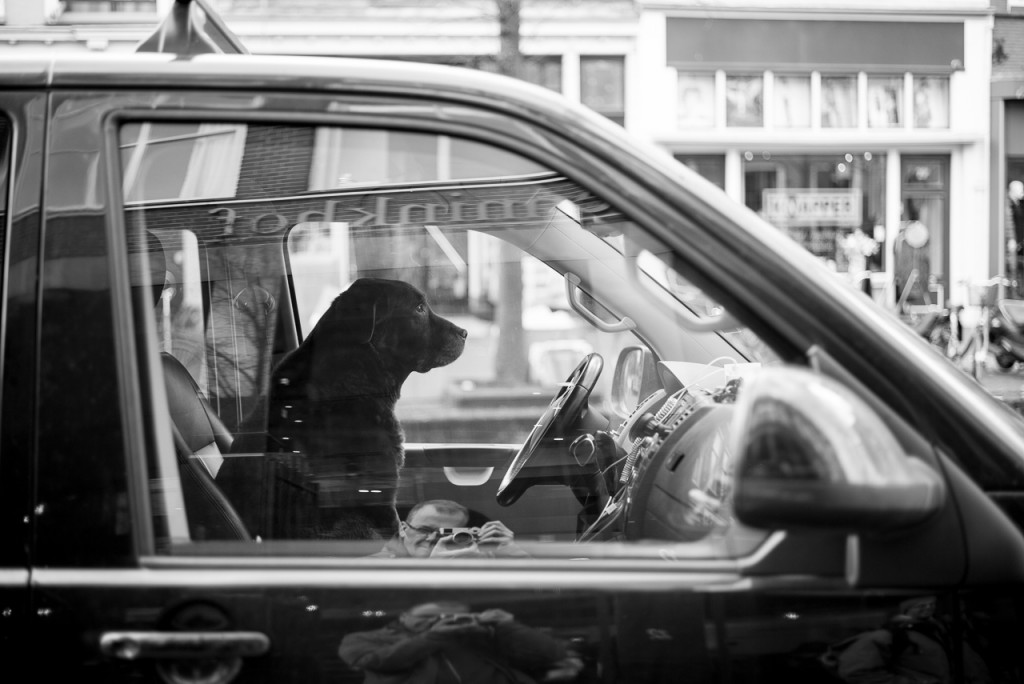 Save the best for last. What a picture!