The Billingham Hadley Large Pro is the biggest bag in the Hadley series and yes, it’s pretty big. The reason I asked for this bag at my contact at Degreef & Partner (the representative of Billingham in the Netherlands) is not because I wanted to carry my M-gear around. Unless you have a lot of gear (and I mean really a lot), this bag is too big for just an M kit. For me it’s the perfect bag when I have a workshop where I need to bring a 15″ laptop, a few cameras, a couple of lenses and lots of other things.

There aren’t too many Billingham bags that fit a 15″ MacBook Pro (mine is a couple of years old and a little bigger than the current MacBook). In fact, the Hadley Large Pro is the only Hadley that fits a 15″. On paper that is, because a few months ago I had a workshop student with a Hadley One who brought a 15″ MacBook Pro in it. A bit tight, but it fits. 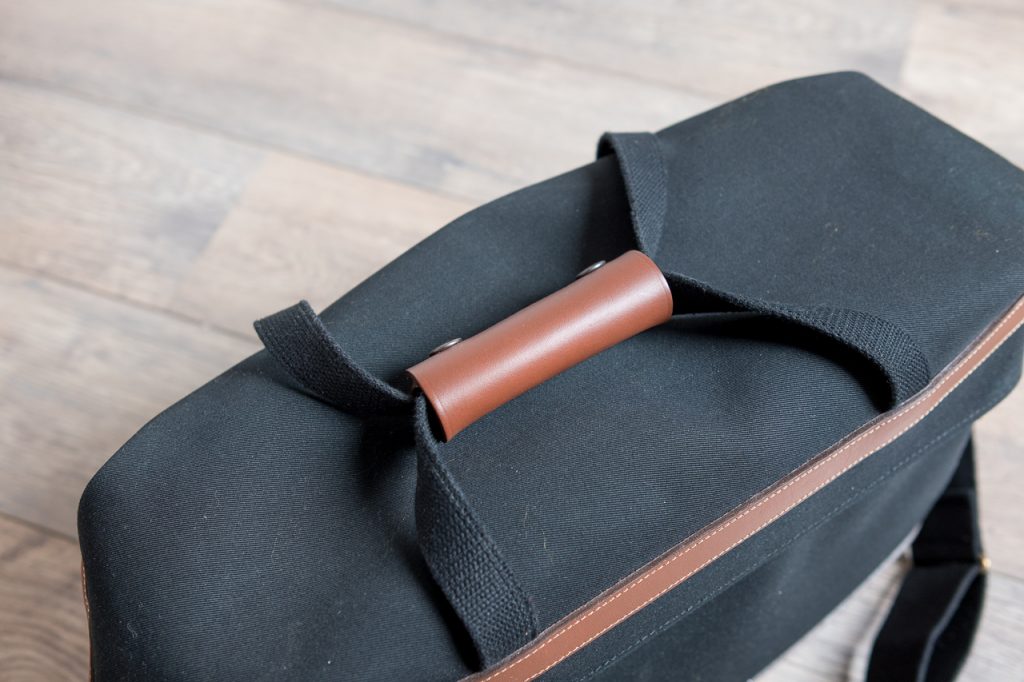 When the bag arrived, it was just like I expected. Sturdy, perfectly made and good looking. If you already have one or two Billinghams, you get used to the quality. It’s probably much sturdier than you’ll ever need. Further inspection of the bag revealed two remarkable things: the first being the closure system. Unlike all other Hadley’s, the Large Pro uses true buckles instead of the quick lock system that I really love. The reason: the capacity of the Large Pro is too big to work with the quick lock system. It needs a more secure closing system.

The second thing that I noticed is that the interior part of the insert is not made of the soft material that you’ll find in other Hadley bags. It means you can’t stick a divider or flap anywhere you’d like. You’re restricted to the velcro that Billingham inserted. M users will find that it’s not so easy to put small lenses in if you want to separate the lenses to prevent them from scratching. 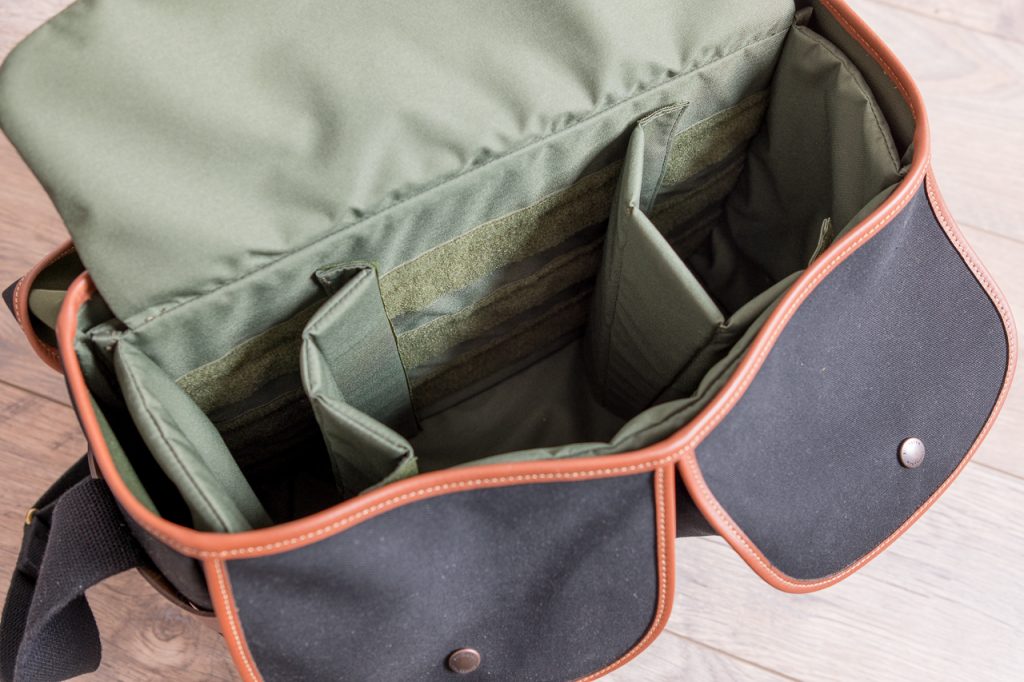 The interior is limited with regards to using dividers, unlike the other Hadley bags.

And that brings us to the purpose of the Hadley Large Pro: it’s not really designed with the M user in mind. It’s far better suited for SL, S and R shooters with big and heavy lenses. For those shooters, plus all DSLR users, it will excel. I do have the SL, but I don’t have any big lenses for it (I don’t need them). I’ve tried to fit the Canon 5Dmk3 with a 70-200/2.8 and that works perfectly.

Or when I go out for a weekend and need a laptop, some camera gear and clothes, a toothbrush and other gear, this is also a nice bag…

But like I said, I do have assignments and workshops where I just need to bring a lot of stuff, including camera stuff and a laptop. Or when I go out for a weekend and need a laptop, some camera gear and clothes, a toothbrush and other gear, this is also a nice bag. I even used it to bring my small soprano ukulele when I visited some friends. I’ve also brought it to a workshop with the Hadley Small stored in the Hadley Large Pro. I used the big Hadley Large Pro to carry my laptop and extra camera gear to show, but only brought my Hadley Small when we went out to shoot. Works perfectly. 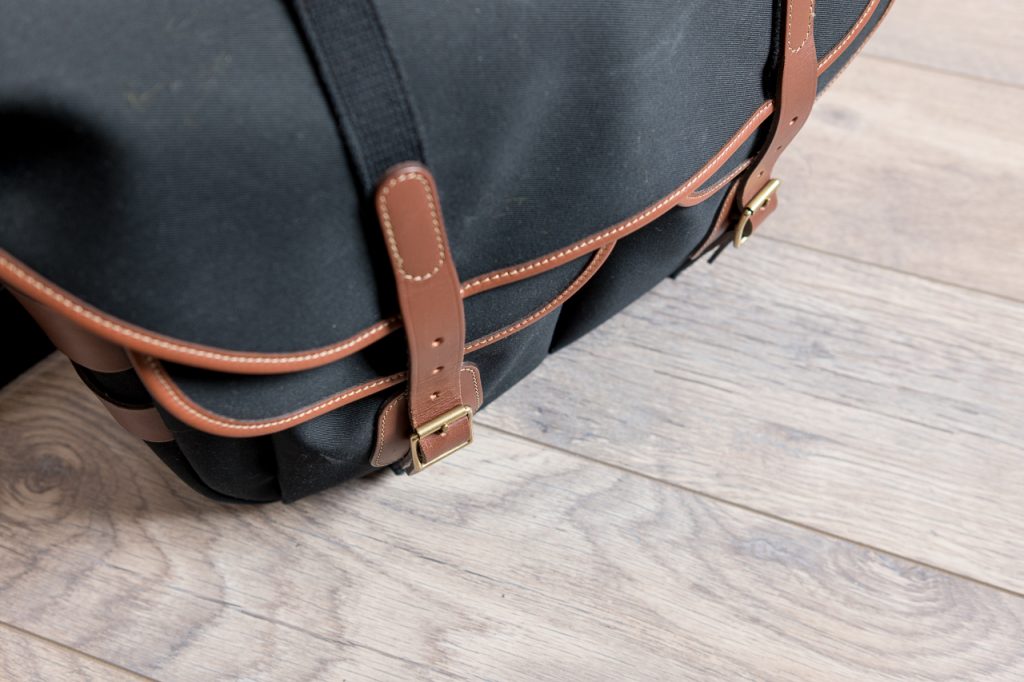 A buckle system provides more security when loaded to the max, but takes a bit more time to open and close, compared to the quick-lock system.

My wife used the bag a couple of times for taking her Sony FS5 camera to a run and gun video assignment. With the grips, matte boxes and microphone removed, the entire FS5 body plus lens, fitted on a Vocas rig, fits in the bag, while maintaining a very small footprint. A lot of video camera bags are very wide and not very suitable to travel with on public transportation. The Hadley does a much better job at that.

Here it is packed with the photo equipment pictured below. It’s better suited for big lenses and cameras than for M cameras and lenses, but it’s nice if you want to take loads of gear to another place and work from there with a smaller bag on the streets.

My review bag is made of canvas which I really love. It will keep the contents of your bag dry as long as you don’t submerge your bag. The FibreNyte is just as waterproof, a bit lighter, but doesn’t ‘age’ as nice as the canvas. All critical parts are made of fine, thick leather that will outlast you. For a bag of this size, brass feet would have been nice, but the base of the bag is probably not wide enough to be ‘put on its feet’. 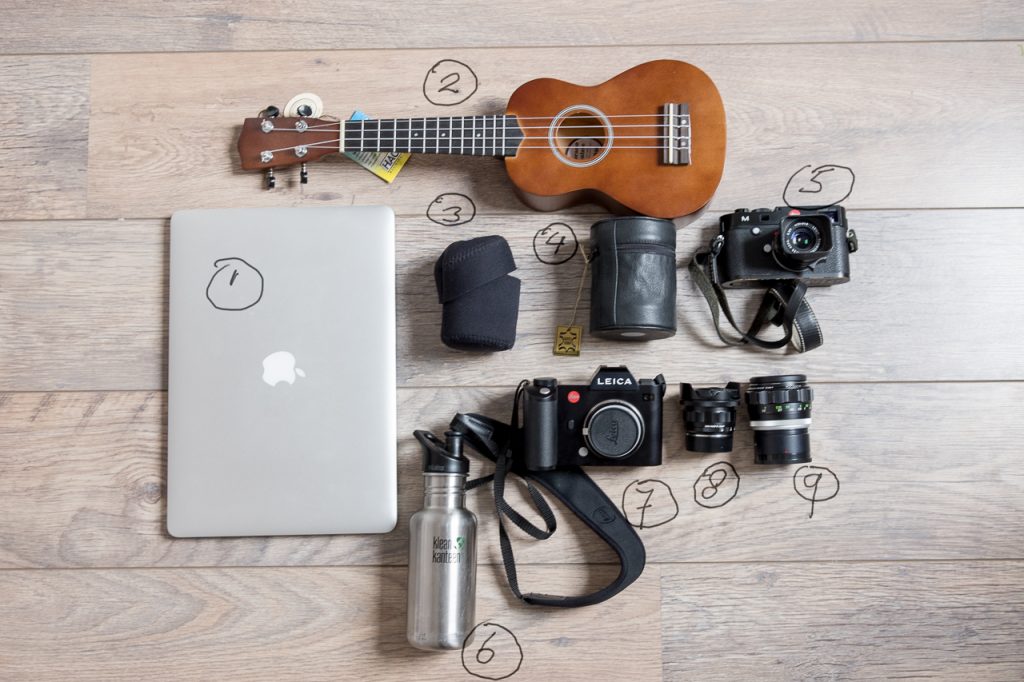 The most unusual contents of a camera bag I’ve ever shown to you…and you can fit much in the bag than I just did.

2: A soprano ukulele. I don’t take this to weddings of course. But it fits in the bag (with the head stock out)

3: A nicely wrapped up Nocti.

The bag is easy and comfortable to carry, but I must say that if you use this bag to the max, you’ll need a shoulder pad, like the SP20 or the SP50. Even then, it’s probably not the best idea to go on a 10k hike. A backpack will be better for that purpose.

The Billingham Hadley Large Pro isn’t a typical M-user bag. It’s a bag for SL, S and R shooters, or for M shooters that bring lots of gear and a 15″ laptop…

The Billingham Hadley Large Pro isn’t a typical M-user bag. It’s a bag for SL, S and R shooters, or for M shooters that bring lots of gear and a 15″ laptop. If you have one or two SL cameras, plus the 24-90, 90-280 and some other stuff, this is probably your bag. For me, it’s a minus that the interior isn’t as customizable as the smaller Hadley bags, because it makes the bag somewhat less versatile. However, for those with the DSLR-sized kit, or for those that bring lots of (non-M)gear, I can’t think of other bags that bring your stuff to your destination with the same amount of protection and style as the Billingham Hadley Large Pro.