When I changed to my leica set, I wanted to use as little lenses as possible. I had gotten sick and tired of my DSLR kit and I would not make the same mistake of buying too many lenses for my M9 again. Also, I didn’t want any extreme lenses, on both the wide angle and tele side of the lens spectrum. Today I shoot most of my wedding work with 35 and 50mm lenses. I use a 75 and a 28 for some occasional shots that are hard to take with the other lenses, but that’s about it. Although I’m a puristic documentary wedding shooter, some couples want a shot of the wedding guests and I think that’s fair. It only takes a few minutes and after that, I change to my role as the ‘observer’ and continue with my work. On most occasions I take this shot with my 28mm, or – depending on the size of the group and the space we have – with my 35mm.  Sometimes there just isn’t enough space to get them in my 28mm frame and for that reason I bring my tiny 21/4 lens, made by Voigtländer. 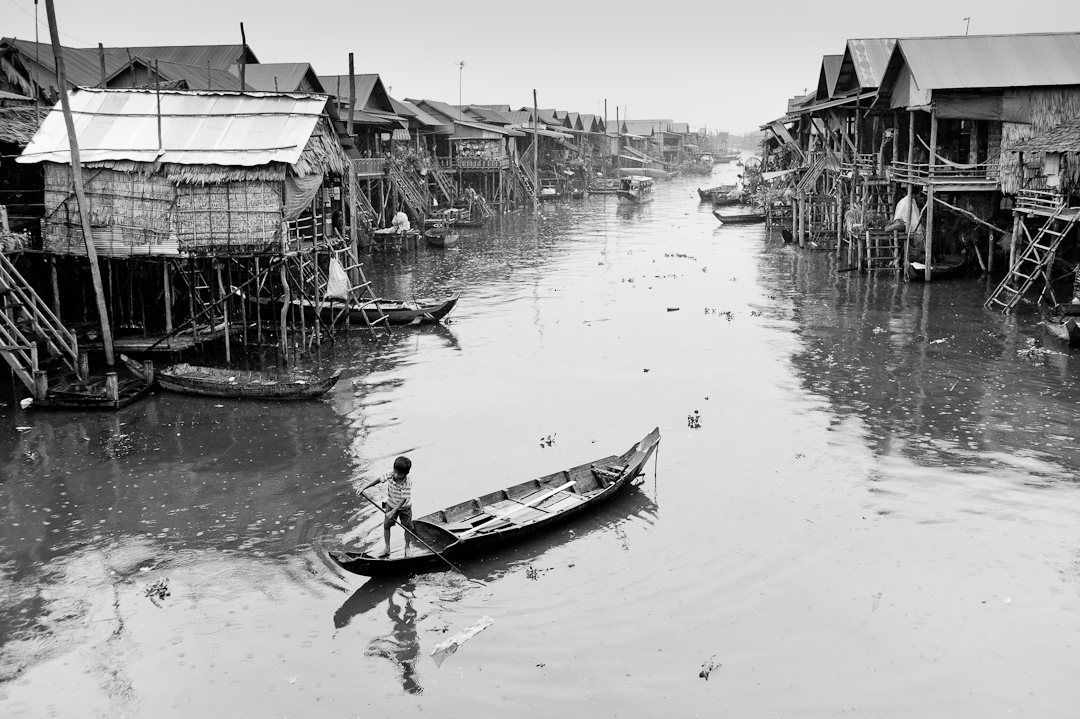 The CV 21/4 in Cambodia in a fisherman’s village

When I started looking for a 21mm I knew I would’t use it much and it had to be very light. I owned the Leica 24/2.8 Elmarit before, but I thought it was way too big and heavy for what I needed. Also, the difference between the 28 and 24 wasn’t big enough to justify taking an extra lens. Finally, I knew from my experience as an outdoor sports shooter that a 21 could deliver some interesting perspectives and in the outdoors, weight is priority number one. The little Voigtländer had some good reviews and was so cheap that I decided to give it a try. When I unboxed the lens at the Leica Boutique in Lisse – I bought most of my lenses there – I was surprised how small and light the lens was. With eight lenses in six groups it weighs only 136 grams and is so tiny that is truly deserves the name ‘pancake’. Since this is the newest version with a bajonet, there is no need for adapters. With a 21mm you’ll need an external viewfinder, unless you want to guess your framing. Voigtländer makes a nice lightweight plastic viewfinder that is a lot brighter than the viewfinder in the M. It doubles as a viewfinder for the 25mm lens, also produced by Voigtländer. 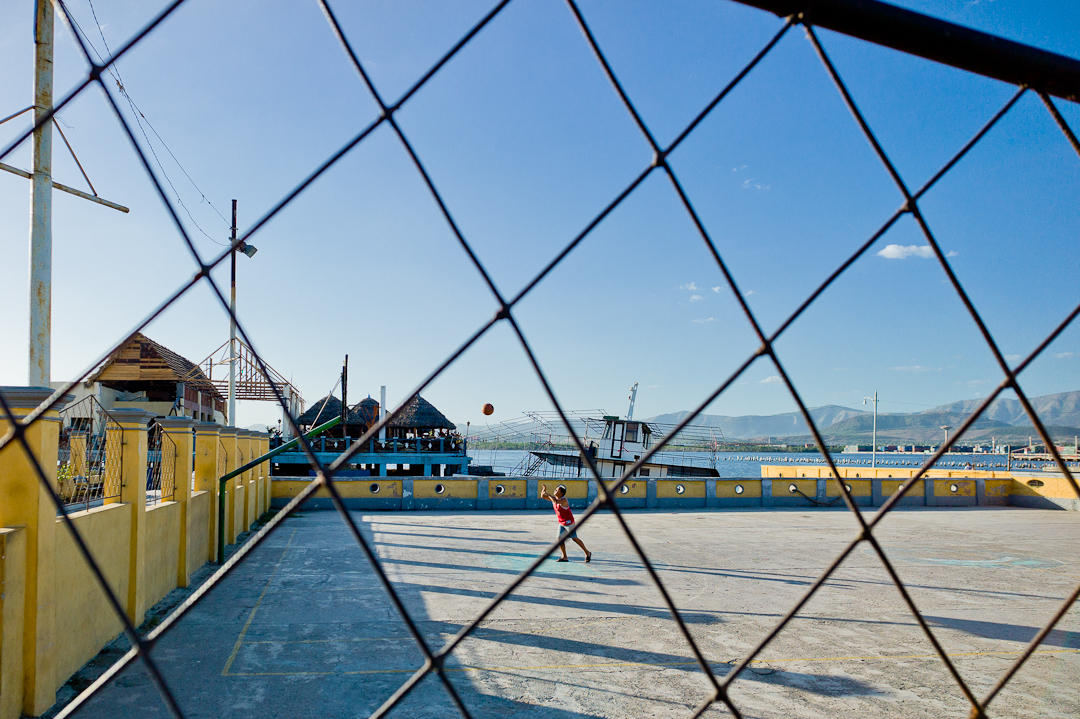 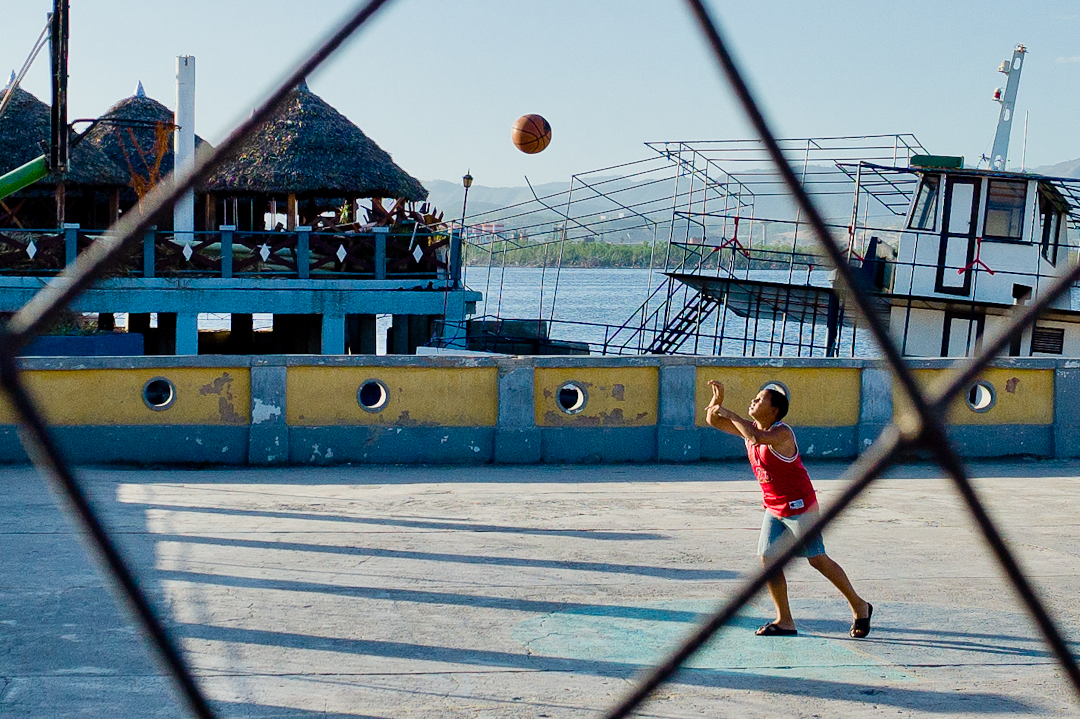 And a crop to show the sharpness. Note the dark frames of the boat against the sky: there is almost no purple fringing, unlike in fast lenses.

Although the CV 21/4 is tiny, it is sturdy as well. It comes with a little screw on hood that doesn’t make sense. You can buy a better one, or avoid shooting against the sun. It does flare heavily, so be prepared. One of the ergonomical drawbacks of a tiny lens is that you’ll have to support your camera, in stead of your lens, with your left hand. Also, you have to be very careful not to have any fingers in front of the lens. If I use this lens when I’m in a hurry, it sometimes happens that I have some fingers included in my shots, just because the lens is so tiny. Another drawback is the delay between focussing and framing. For critical focus, you’ll have to use the rangefinder patch in your viewfinder, but for framing, you’ll need the external viewfinder. With a 21mm however, especially with a slow 21mm, focussing is never as critical as with a faster and longer lens. If you’re into zone focussing and shooting from the hip, you’ll love this lens. It is so easy to get everything in acceptable focus from close up to infinity. Closest focussing is 0.5 meters, but you’ll need to guess focus for that, or use it with live view on the Leica M240, since the rangefinder on the M only focusses to 0.7 meters.

I don’t shoot brick walls to compare sharpness and distortion. But here’s what I found with my copy. I was surprised with the little distortion the 21 showed. I have seen lenses doing worse with regards to that. Sharpness is excellent. As you can see in the pictures above. It is sharp from corner to corner and corner sharpness increases when you stop it down to 5.6/8. Ken Rockwell, although not a fan of using this lens on the M9, compared the CV21 to the Leica 21/2.8 and found the cheap 21 to be sharper in the centre than the Leica. Rendering is nice, a bit classical, but not soft at all. The CV 21 is quite prone to heavy flaring, also due to the hood that doesn’t do much. But even when shot against the sun, the lens delivers sharpness and contrast. 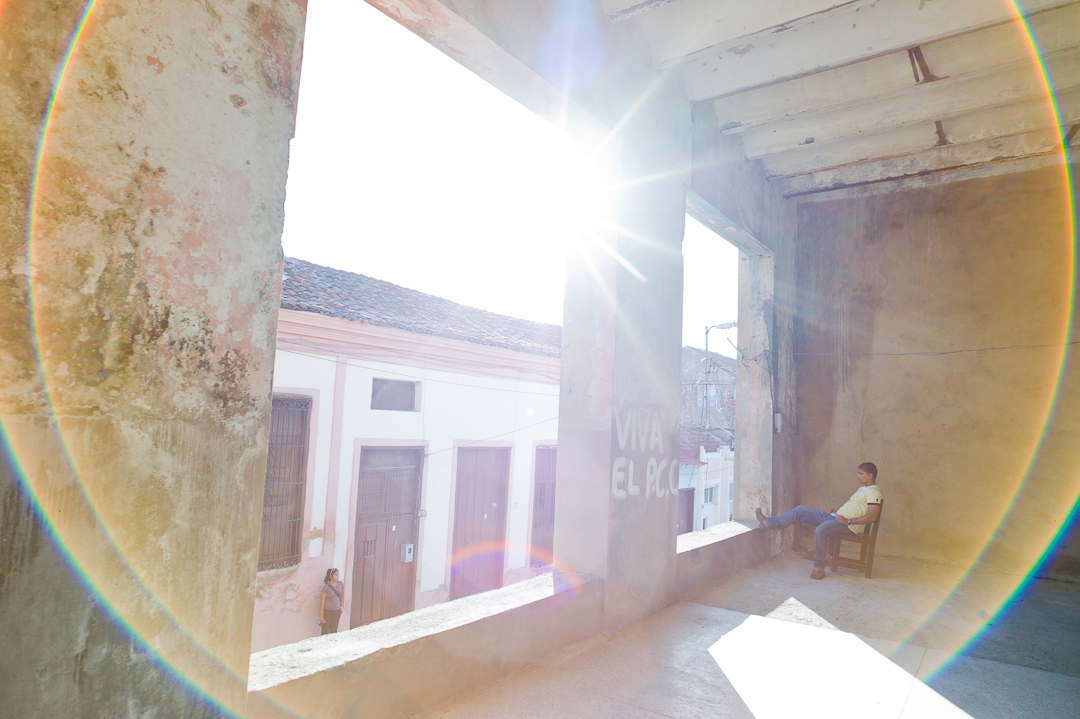 When shot against the sun, the CV 21/4 flares heavily… 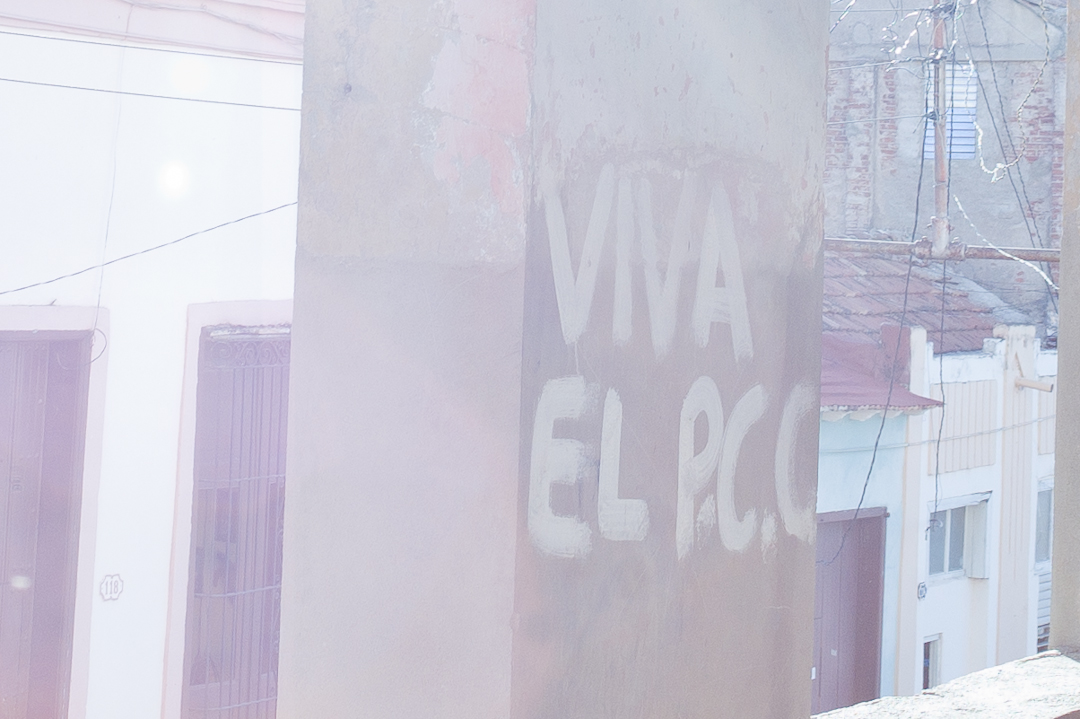 …but still delivers sharpness and contrast.

As far as bokeh goes with a 21/4 lens, the short minimal focussing distance makes it possible to get a little bit of depth of field in the image. As you can see, bokeh is nice, but nothing special. You don’t buy this lens for bokeh though. 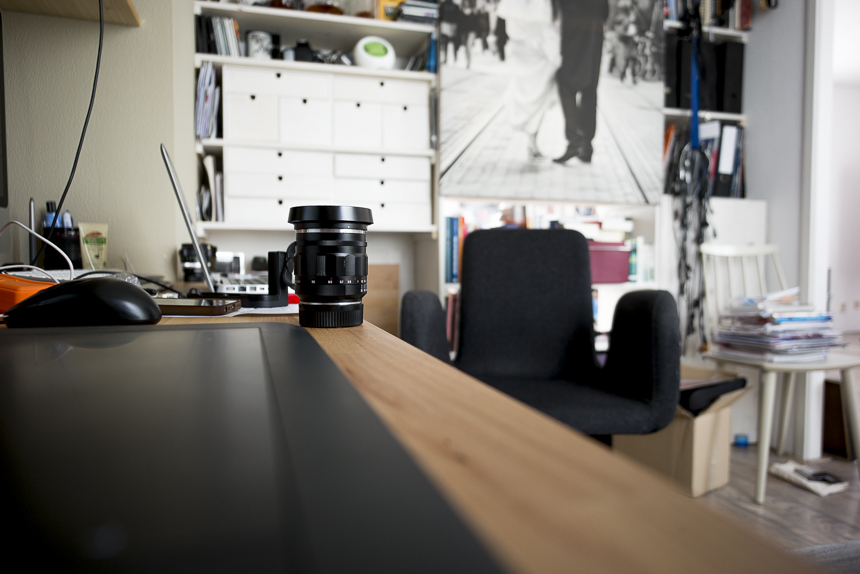 One of the reasons not to buy a 21mm for a Leica M is the fact that images will suffer from cyan corners and heavy vignetting. According to Ken Rockwell, the CV 21 is ‘awful’ on the M9. Well, I’ve heard him say other weird things about Voigtländer, so I didn’t care. Cornerfix could take care of this problem, so I read. It turned out there was an even better solution: manual coding on the camera itself. The CV 21/4 is not the only lens that suffers from heavy vignetting and cyan corners. The Leica 21/2.8 suffers from the same problem, so Leica created a clever in-camera solution. As you know, new lenses are coded to compensate for lens errors. I don’t like this option, because sometimes I want to use the natural vignetting of a lens, just because I like it. The cyan corners aren’t likable at all, so Leica did a good job to create a profile for this lens. By setting the lens detection to ‘manual’ and by selecting the 21/2.8 11134 lens in the menu, you get rid of the problem in the M9. You could also have the CV21/4 coded on the lens itself and set the camera to ‘automatic’ lens detection. The problem with manual coding is that you have to remember to switch the lens detection off, after changing your lens. If you forget, you’ll end up with the opposite of vignetting: light corners and the opposite of cyan: green/blueish corners. Absolutely terrible, and you can’t fix it. 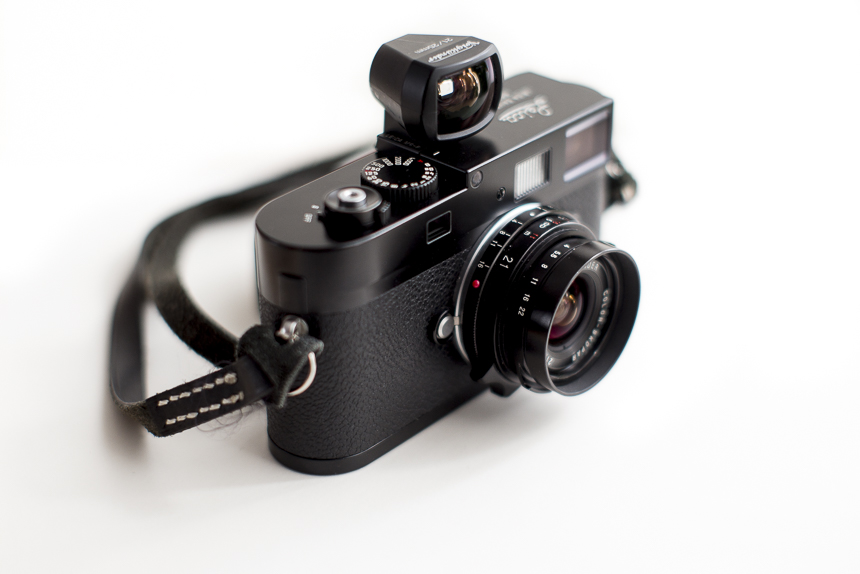 Does it get any better? A full frame, all black, lightweight camera. Perfect for street photography 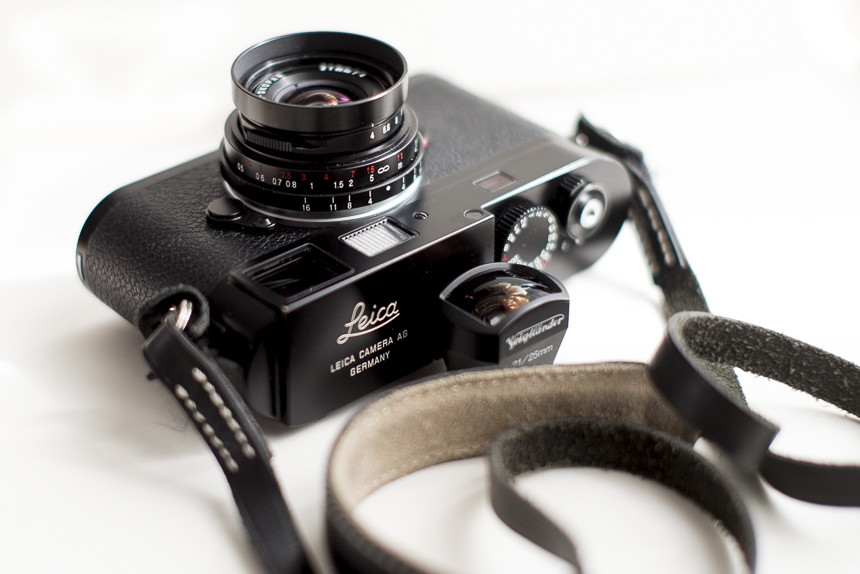 If you’re in for a small, light, sharp and cheap wide angle for your rangefinder: this is your lens. I can only think of one reason why you shouldn’t buy this lens and that’s the speed. As you know, f4 isn’t fast. In fact, it is unbelievably slow. For indoors, you’ll either need high ISO, or a tripod. Voigtländer also makes a fantastic 21/1.8 lens. I might get one in the future to give it a try.